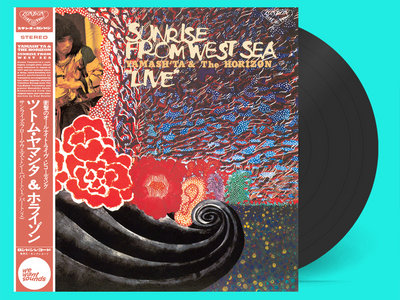 Wewantsounds is delighted to announce the first-ever release of 'Sunrise From West Sea', a mesmerising performance by Stomu Yamash'ta accompanied by Jazz pianist Masahiko Satoh (well known for his involvement in the New Herd Orchestra and his 'Belladonna of Sadness' soundtrack) and Taj Mahal Travellers founder Takehisa Kosugi on Electric Violin. The line up, also comprising Hideakira Sakurai on Electric Shamisen, is a spaced-out improvisational soundscape over the two LP sides. Remastered from the original tapes, the album is reissued here for the first time ever on LP. The LP comes in its beautiful original gatefold artwork with OBI strip, 2 page insert and a new introduction by journalist Paul Bowler.