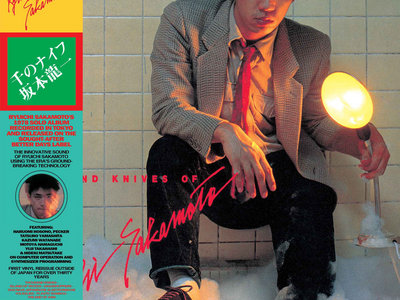 RYUICHI SAKAMOTO'S FIRST SOLO ALBUM FROM 1978 RELEASED ON THE BETTER DAYS LABEL AND FEATURING THE SYNTH CLASSICS "PLASTIC BAMBOO," "END OF ASIA" & "THOUSAND KNIVES" IS REISSUED OUTSIDE OF JAPAN FOR THE FIRST TIME IN DECADES.

Wewantsounds is proud to announce the release of Ryuichi Sakamoto's first solo album originally released in 1978 on the sought-after Better Days label. Sakamoto was a member of Yellow Magic Orchestra at the time but the group hadn't released their first album yet. Featuring Sakamoto on a wide range of synthesizers and keyboards programmed by Hideki Matsutake, and accompanied by a few musicians including Haruomi Hosono and Pecker, "Thousand Knives" was a blueprint for the YMO sound and includes cult classics that were to become live favourites. Save for a small-scale release in 1982, this is the first time the album is being released on vinyl outside of Japan. Remastered from the original tapes by renowned producer and engineer Seigen Ono, the LP edition comes with original artwork including OBI strip and four-page insert with new introduction by Paul Bowler.